Ekaterinburg into Sverdlovsk: What's in a Name?

I am writing my dissertation on the Russian Revolution and Civil War in the provinces, in particular the city of Ekaterinburg in the Urals region. With a population of 70,000 in 1917 and over 100,000 in 1923, Ekaterinburg was a significant industrial and urban center on the border of European Russia and major hub on the Trans-Siberian Railroad. During the Civil War, much to its detriment, the city’s geographical position left it on the front lines of the conflict in the East and Siberia, and Ekaterinburg changed hands at least six different times between 1917 and 1919, including the rule of Soviet power, the White armies of Admiral Aleksandr Kolchak, a regional provisional government, as well as a brief occupation by armed Czechoslovak Legionnaires fighting their way through Siberia to rejoin the Entente powers on the Western front. Thus, the city suffered the deprivations and chaos of repeated occupations, which were nearly always followed by purges, executions, and major shortages of food and essential goods.

While the experiences of the Revolution and Civil War in the provinces have received some sophisticated scholarly treatments, from studies of Saratov, Viatka and Udmurtiia, and Kazan and Nizhnii Novgorod, the story of Ekaterinburg during this time is important because of its particular experience of radically different types of rule and political structures in a short period of time. My dissertation will trace the transformation of Imperial Ekaterinburg into Red Sverdlovsk by focusing on local institutions of power and governance, such as the city government (in its many forms), the police, and the press and publishing apparatus within the framework of competing political, social, and cultural conceptions of “order” and “disorder.” My research asks what I hope are several important questions: In what ways did “order” become an ideological construct, and what was the relationship between “order” on the city streets, and political articulations of it by different regimes? Who were the local bureaucrats, professionals, and journalists, and how did they shape Russian state-building efforts at the local level? How did the central authorities utilize local agents to further their goals, and what outcomes did they achieve? Finally, how did those in power establish their legitimacy using the city government, the police, and the press?

Color photograph of Ekaterinburg in 1909, taken by Sergei Prokudin-Gorskii[2]

Another significant part of my dissertation deals with the production of local histories, public sites of memory, and stylized remembrances of the Revolution and Civil War in Ekaterinburg. Like elsewhere across the former Russian Empire, after the Bolsheviks secured power in 1919, they engaged in an ideological project of cultural and social transformation that elevated the October Revolution and Civil War to the status of foundational myths of the nascent Soviet state, and thus part of the bedrock of a new “Soviet” culture and identity. Through the work of the Soviet Commission on the History of the October Revolution (Istpart), mass publication celebrations were organized on key anniversaries, the names of public spaces were changed to honor revolutionary heroes, and local histories were written and distributed (often by participants in the events) to craft a historical narrative of the revolutionary epoch that stressed local conditions while interweaving within a larger national discourse directed from Moscow (for an in-depth look at this process, check out Frederick C. Corney’s Telling October: Memory and the Making of the Bolshevik Revolution). The flourishing of local studies (kraevedenie) during the early 1920s was short lived, and as Josef Stalin cemented his control over the Communist Party and the Soviet Union, local accounts were replaced with overarching national chronicles focusing on the role of Stalin and the Party.

As young historians, it is often tempting to dismiss or undervalue the contributions of the Soviet historiography, whether it is because of the ideological and political slant of the works (especially under Stalin), the inflexible Marxist framework through which Soviet historians examined the past, the excessive focus on the working class and economic/industrial statistics, or the reduction of diverse social identities to simplistic categories of class. For example, in Viktor Mikhailovich Bykov’s 1922 Sovetskii Ekaterinburg, there were only three types of social groups in Ekaterinburg: Workers, Peasants, and “Intelligentnyi” Professions.

However, many Soviet local histories (especially those from the 1920s) are an invaluable resource for statistics and contextual information, but more importantly, they provide a window into the early ideological transformation of Soviet culture through history and literature. They reveal much more about the state of Soviet social sciences and culture and the drive to use history as an instrument for transformation than their detailed tables suggest.

In the case of Ekaterinburg, historical interpretations of the revolutionary and wartime experience assumed a greater importance than other major cities in the USSR, because of the fact that it had fallen into the hands of “enemies” of the Soviet state several times, and it was clear that many of the city’s residents were hostile to Soviet power during the Civil War. Thus, works like Bykov’s Sovetskii Ekaterinburg sought to anchor the city in the Soviet tradition and provide a useable past that emphasized its “Soviet” and working class identities. Local histories during the early 1920s were produced by a small coterie of amateur historians and veterans (survivors) of the Civil War. Victor M. Bykov and his brother, Pavel M. Bykov, were both locals and veterans of the conflict, with the latter emerging as one of the first leaders of the Ekaterinburg Soviet in 1917. In addition to Sovetskii Ekaterinburg, Viktor M. Bykov also edited and published several other “reference” works about the city’s history, including Iz zhizni Ural’skikh organizatsii (1923), the ambitious Ekaterinburg za dvesti let: 1723-1923 (1923), and Kolchakovshchina(1924). His brother Pavel M. Bykov published two works of local history, Rabochaia revoliutsiia na Urale (1921), a collection of documents and “episodes,” and Poslednie dni Romanovykh (1926). 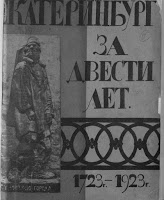 The Bykov brothers were later joined in their endeavor by professional historians, and foundational texts of the late 1920s streamlined the earlier work and solidified an ideological interpretation of the city’s history. The most notable works from this period include A. Baranov’s Oktiabr’ i nachalo grazhdanskoi voiny na Urale (1928), A. Taniaev’s Rabochii klass Urala v gody voiny i revoliutsii (1927) and Kolchakovshchina na Urale (1930).

Collectively, the interpretation of historical events in Ekaterinburg stressed the fact that the city had a long and storied history of working class consciousness, stoked and led by a talented organization of local Bolsheviks. They drew upon the city’s founding as a factory town in the 18th century and the subsequent development of heavy industry and factories, most notably the massive Verkh-Isetskii works, as essential preconditions for later revolutionary activities. The authors pointed to the experience of the Revolution of 1905, where a young Yakov Sverdlov led a socialist demonstration against the October Manifesto that turned into a bloody conflict with the so-called “Black Hundreds,” as a formative revolutionary experience that prepared local cadres and national leaders for the armed insurrection of October 1917. The fact that the Ekaterinburg Soviet returned a Bolshevik majority in March 1917, the only of 13 major urban centers in the Urals to do so, was celebrated and memorialized. Monographs and documents on the rule of Kolchak’s White government (Kolchakovshchina) emphasized that the Whites were brutal occupiers who relied on violence and terror alone to rule (similar statements could be made about Soviet power, but that is neither here nor there) and preserved the image of a “Red” Ekaterinburg eager to be liberated. Local “heroes” of the Bolshevik underground, such as Anton Valek, were lionized and held a central place in the city’s lore up until the end of the Soviet Union in 1991.

The struggle to examine and redefine Ekaterinburg’s revolutionary history was not limited to academic and popular discussions in literature. The city’s public places were transformed to move beyond the tsarist past and cement the Bolshevik’s victory in war and revolution. In a process that unfolded similarly in most cities and towns in the USSR, the names of streets and public squares were changed to celebrate revolutionary heroes and personalities. Some of the changes reflected acknowledgement of the pantheon of heroes of October, as Main Avenue (glavnyi prospekt) became Lenin Avenue, Bogoiavlenskay (“Epiphany”) Street became Volodarskii Street, and Uktuskii Street became Trotsky Street (not for long, however). International heroes received recognition as well, with Karl Liebknecht, Rosa Luxemburg, and Marx and Engels appearing on the city map. But local heroes took center stage in many parts of the city, with Pokrovskii Avenue (the city’s main thoroughfare, in addition to Lenin Avenue) becoming Malyshev Avenue (Ivan Malyshev was a local revolutionary leader killed fighting Ataman Dutov). Other local figures killed during the war, such as the sailor Pavel Khokhriakov and Bolshevik leaders N. Tolmachev, L. Vainer, and I. Sheinkman, all had their names emblazoned on some of the busiest streets in central Ekaterinburg. Cathedral Square, the city’s central square, lost its cathedral and statue of Tsar Alexander II and was renamed “1905 Square,” which it remains as today (like nearly all of the previously mentioned names).

The transformation of Ekaterinburg’s history, culture, and public spaces reached a height in 1924, when the city was renamed Sverdlovsk, in honor of Yakov Sverdlov, who died during the Civil War. So what’s in a name? One detail I have not consciously drawn on, but may be familiar to most readers, is that Ekaterinburg was the site of the execution of Tsar Nicholas II and his entire family in 1918, in response to the advance of Czechoslovak Legionnaires who would soon capture the city. And although details remain sketchy and there is no “smoking gun” document, it is widely suspected (especially locally) than it was Sverdlov himself who gave the order from Moscow to execute the Romanovs, although the official Soviet position was that local Bolsheviks, under the leadership of Yakov Iurovskii, executed the royal family on their own initiative. In any case, Ekaterinburg, a city founded by Peter the Great to expand the frontiers of the Russian Empire and named after his beloved wife, Ekaterina, was rechristened after a Bolshevik leader at the very least involved in the extinguishing of the Romanov dynasty that had ruled Russia for over three centuries. Exploring the contours of local history and the transformation of public spaces and memory in the early Soviet Union reveals a complex and rich dynamic that reflects the larger ideological project of the Bolsheviks to transform the former Russian Empire into a socialist state while emphasizing the importance of the local context.

The Ipatev House, where Tsar Nicholas and his family were executed in 1918. The house demolished in the 1970s and now is the site of the Church on the Blood[6]

Dakota Irvin is a PhD Candidate at the University of North Carolina at Chapel Hill.

The Tsar's Numbers: The Rise of Statistics in the Russian Empire

RESEARCH IN PROGRESS: A Peripheral Borderland

Research in Armenia: An interview with Shushan Ghazarian

Shushanik Ghazarian is a PhD student in cultural anthropology and researcher at the Institute of Ethnography and Archaeology at the National Academy of Sciences in Yerevan, Armenia. In this interview