The Centre-Periphery Relationship during Khrushchev’s Thaw: The View from Latvia

During the 1950s, a faction developed within the Latvian Communist Party (LCP). These were the so-called ‘national communists’, who were bound by wartime and Komsomol connections. The national communists relied on their status as populist defenders of the Latvian culture and language for legitimacy as leaders of the LCP, but without the Party, they had no claim to power in an independent Latvia. Therefore, they sought to exert autonomous control over various aspects of life in Latvia, yet crucially within the Soviet one-Party system. The national communists took advantage of Soviet Premier Nikita Khrushchev’s de-Stalinisation campaign to attempt a redrawing of the invisible demarcation lines of acceptable autonomy for the Soviet Republics. Khrushchev’s denunciation of Stalin at the 20th Party Congress and the onset of de-Stalinisation facilitated Latvia’s responses to, and exploitation of, events in the Centre. For a brief period, the national communists were in the right place at the right time, capitalising on the repudiation of Stalinism and Khrushchev’s determination to return power to a Communist Party that was malleable and in flux after Stalin’s death. What they were able to achieve, rather than how long their policies remained in force, demonstrates how significantly the centre-periphery relationship changed by the end of the 1950s in comparison to the beginning of the decade. Furthermore, Latvia was not the only Republic to substantially change (or attempt to rebalance) the relationship, as evidenced by the purges of leaders in the Soviet Republics at the end of the 1950s. 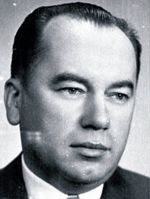 The success and brazenness of the national communists’ initiatives is remarkable: between 1956 and 1959 they succeeded in gaining control over the most important positions and decision-making bodies in the LCP. They replaced hundreds of Russian officials sent from Moscow including the Second Secretary Filipp Kashnikov whose authority was undermined in dramatic fashion when the national communists arranged for hundreds of delegates to vote down Kashnikov’s re-election in a rare display of democratic centralism at the 15th Latvian Communist Party Congress in January 1958.1 It was representative of Moscow’s new approach to the Republics under Khrushchev that the Soviet leader accepted Kashnikov’s ‘rolling over’ (prokatili) from a position reserved for Moscow’s (ethnically Russian) watchdogs to supervise first secretaries in the Republics.2

In 1956, directly in response to perceived Russification, the national communists launched a ‘Latvianisation’ campaign by creating ethnically charged legislation designed to reverse post-war Russian gains in demographics and language. The national communists used the Soviets own rulebook to covertly discriminate against Russian migration to Riga (the restrictions ostensibly also applied to Latvians moving from the countryside but in practice the measures targeted ethnic Russians), receiving confirmation from the Soviet government that they possessed the power to institute a passport regime restricting the issue of residency permits.3 Possibly even more egregious to Russians in Latvia was the creation of a language law requiring government, Party and service sector employees to have gained a conversational level of fluency in the Latvian and Russian languages within two years or lose their jobs.4 On these issues, Latvia served as an inspirationally rebellious Republic. The aspiring upstart Azerbaijan followed suit by enshrining Azerbaijani as the language in the Republic’s constitution and requiring knowledge of the titular language for state employees within six months.5 In 1958, both Republics led a revolt against the imposition of Khrushchev’s so-called Thesis 19 education reform that would have allowed Russian school students in the Republics to opt out of studying the titular language.6

The list of autonomous actions taken by the national communists in Latvia goes on: the promotion of indigenous cadres, courting of local environmental concerns over All-Union economic ones, a cultural revival based on elements of pre-Soviet Latvian culture, and the obstruction of the application of Khrushchev’s corn campaign to Latvia.7 In 1958, the national communists utilised Khrushchev’s decentralising Sovnarkhoz (Regional Economic Council) reforms to reorient the local economy away from Stalinist heavy industrial priorities and towards more traditional light and food industries whose production was consumed inside Latvia rather than exported to Russia. This economic reorientation was deliberately designed to curb the need for Russian labour to staff Latvian factories.8

On these fronts, between 1956 and 1959, the national communists’ initiatives gained traction and produced significant and varied results: increased ethnic Latvian control of the LCP, reduced Russian migration, increased Latvian cultural production, economic disruption, frustration of the school reform, and discontent from Russians in Latvia and conservative politicians in Riga and Moscow. This was a Latvian response to perceived Russification and colonisation. The memoirs and speeches of the national communists are peppered with references to the need to protect the Latvian language and culture.9 This was the reaction of a small nation trapped between large, belligerent ones, as evidenced by the 1939 Molotov-Ribbentrop Pact, which carved up Eastern Europe between the Soviet Union and Nazi Germany.

An implicit, and albeit briefly successful, renegotiation took place between Moscow and the non-Russian Republics during the first half of the Khrushchev era in which Moscow proved itself open to compromise. That these policies in Latvia (and Azerbaijan) survived in operation for two and a half years in the face of opposition from the Soviet military and local Russian and Russified politicians but without any decisive interference from Moscow, is striking. It throws into question our understanding of Russian dominance within the Soviet political system and suggests that in the mid-1950s the centre-periphery relationship in the USSR, in contrast to the Stalin era of hyper-centralisation, dramatically shifted, albeit temporarily, in favour of the republics. If it was a case of a tug-of-war between centre and periphery between 1953 and 1959, then the Centre lost.

The centre-periphery relationship was once again overhauled following the reaction of the conservative wing of the Soviet leadership to the rebalance that took place during the 1950s. Khrushchev’s offer of limited economic reform and the transfer of some decision-making powers to the Republics only encouraged them to try to wrest further devolution from the Centre. When, as in Latvia, fiscal autonomy became linked with nationalist policies, the Centre retracted the proffered decentralisation, judging it too unpredictable to be managed by the Soviet Republics themselves. The Kremlin’s chief ideologue, Mikhail Suslov, in conjunction with other conservative hardliners (KGB Chairman Aleksandr Shelepin and Department for Party Organs Chairman Vladimir Semichastnyi), engineered a wave of purges across ten Soviet Republics between 1959 and 1961, ousting many unreliable leaders (particularly the national communists in Latvia, including the rescinding of all their legislation) who enjoyed popular support in their Republics as they flirted with populist nationalist policies during the Thaw era. 10

Khrushchev was forced to concede that his attempts to improve the system through decentralisation had gone awry. He sanctioned the adoption of a new Party Programme at the 22nd Party Congress in October 1961. This was a comprehensive rebuff to local aspirations, especially those personified by the national communists. It represented diminishing tolerance in the Centre towards localism and signalled the recentralisation of the Soviet system, and reinforced the dominant role of the Russian nationality within the Soviet hierarchy. 11 Thus, questions about the centre-periphery relationship were relegated to the Brezhnev era, though running roughshod over non-Russian sensibilities and depriving the Republics of genuinely popular voices in their local administrations only sharpened the divide.

It is doubtful that the national communists would have enjoyed the latitude to implement their programme in another Soviet era after the end of the korenizatsiia (indigenisation) policy in the mid-1930s. Khrushchev’s Thaw offered a glimpse of an actually federal, less Russian-dominated Union, but one that contradicted the existing Union moulded by Stalin and thus proved short-lived.

The study of the centre-periphery relationship from the perspective of Latvian history has thus far been rather one-sided. Historians in Latvia accentuate notions of the Soviet periphery by focussing their research solely on the local actions and responses of the Latvian Communist Party and government to events and initiatives in Moscow. Few Latvian historians have visited Moscow’s archives and Russian historians do not make the trip to Riga. In this way, historiography in the Russian and Latvian languages develops separately, considering only either the ‘centre’ or the ‘periphery’ and offering a unilateral (instead of binary) analysis of relations between Moscow and Riga. We can substantially improve our understanding of the relationship between Moscow and the Republics by using materials both from central organisations that acted as the transmission belt for policy implementation in the Republics, and by studying the activities of the Republics’ leaderships themselves, in order to redefine the level of control exerted by the Centre.

Michael Loader is a Postdoctoral Research Fellow at the International Centre for the History and Sociology of World War II and its Consequences at the Higher School of Economics in Moscow. He received his PhD in November 2015 from King’s College London with a dissertation entitled ‘The Thaw in Soviet Latvia: National Politics 1953-1959’. His research has been published in Europe-Asia Studies, Nationalities Papers: The Journal of Nationalism and Ethnicity, the Journal of Baltic Studies, and the Journal of the Institute of Latvian History. His current research project is about Soviet patronage and power relationships and the career of Politburo member Arvīds Pelše.

Soviet Writers Between Center and Periphery, or How I Discovered My Dissertation Topic in a Village

Meanings and memories of a 'lost' borderland city: the case of Vyborg

Black on Red: Translating women from the francophone African periphery in the Soviet Union